CHAMPION: UK's Favourite Park nominees you're making a song about this week 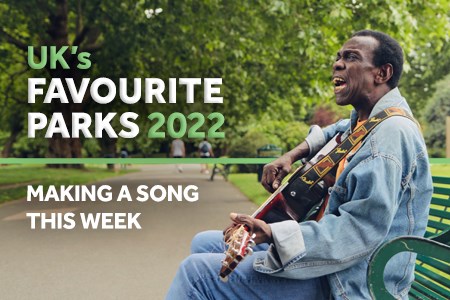 Voting for UK's Favourite Parks 2022 opened a fortnight ago and you've already been voting for parks and green spaces which are close to your hearts in your thousands. Quite literally - yesterday the total number of votes cast surpassed the 10,000 marker and keeps rising by the minute!

After we featured the ten 'fastest starters' in the public vote last week, today we put the spotlight on the ten nominees you've really been making a song about with your votes over the most recent seven days.

During the last few years we have valued our local green spaces more than ever, and earlier this week once again we saw parks identified as an important part of the answer to a public health emergency. These spaces have been packed this week as the heatwave hit Britain and we all looked for somewhere to get outdoors and cool off, so perhaps it is no surprise that many of the green spaces you've been making a song about also include quite a bit of blue space!

Over 10,000 votes have already been cast in total for UK's Favourite Parks 2022 and these are the ten parks you've been making a song about during the most recent seven days of voting. In recognition, they will have a special badge displayed next to their nomination for the next seven days. They are showcased below in alphabetical order, along with why they are so special according to their nominators:

Cae Glas Park
Oswestry, Shropshire
"Everyone is made welcome, it has a great range of facilities, brilliant free events through the year, the staff are friendly and look after it really well. Plus it is absolutely beautiful!"

Castle Park
Colchester, Essex
"Colcestrians are privileged to have such a wonderful large park in an easily accessible urban setting. As well as its extensive green spaces used for both informal leisure activities and public events, there are fully-equipped children's facilities and wildlife in abundance."

Ferry Meadows in Nene Park
Peterborough, Cambridgeshire
"There is something for everyone - plenty of open green space as well as woodlands, lakes, meadows and the river. There are play areas for children, wheelchair accessible paths, trails for walking and cycling and water sports for hire."

Horsham Park
Horsham, West Sussex
"I am usually in the park at least every week, whether this be for a walk or a run. It's a beautiful green space which attracts a number of people of all different ages and backgrounds. I would love for this space to be protected via Fields in Trust for future generations."

Kingsbury Water Park
Sutton Coldfield, Warwickshire
"Kingsbury Water Park has 15 lakes situated in over 600 acres of country park. Stroll along the surfaced paths, explore hidden corners, spot birds and wildlife, or hire a bike. Whatever your idea of a countryside visit is, you will find it at Kingsbury."

Seaton Park
Aberdeen, Aberdeenshire
"This park has something for everybody, extensive paths through grassy and wooded areas and by the river - wonderful for dog-walking. Children's play area a walled-garden with azaleas, magnolias and camellias. Beautiful formal and informal planting. Otters can sometimes be seen."

Telford Town Park
Telford, Shropshire
"This park has just got better and better over the last few years and has something for ALL age groups and physical abilities. It is always maintained to a very high standard and the staff are well trained. It also has a very active award winning Friends of group."

Victoria Park
Tower Hamlets, Greater London
"Victoria Park is big and constantly busy, the diversity of its use reflects our communities, from the Old English Garden to the Wheel Park via arches from Old London Bridge and a Pagoda, it has been called the People's Park since the 19th century and it is as true now as ever."

These ten parks are those to have received the most votes in the last seven days - they don't necessarily represent the top ten in the public vote overall and there are many more green spaces not far behind them! With four weeks to go there is still plenty of time to help a park you love be named a Local Favourite, National Favourite, or even as the UK's Favourite Park 2022.

If you haven't cast your vote yet then it only takes a few moments to do so - simply search the list of nominations for parks near you, chose your favourite and submit your vote. Don't forget to click the link in the email you receive to verify your vote else it won't count towards your park's total!