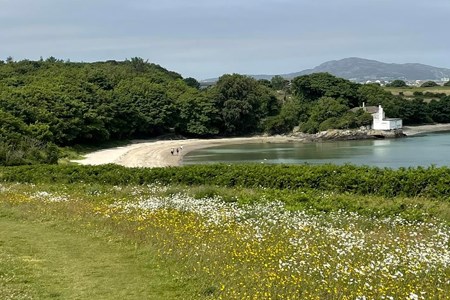 Earlier this summer you nominated 364 local parks and green spaces for UK's Favourite Parks. You then voted in your tens of thousands, demonstrating the immense love that we all have for our local parks, and we're delighted to today announce that the UK's Favourite Park 2022 is Penrhos Coastal Park in Holyhead, Wales.

Over 30,000 votes were cast for parks across the UK which represented the wide diversity of green spaces we all use and enjoy, from large country parks to major city parks to small neighbourhood pockets of green. Penrhos Coastal Park emerged as the overall UK winner having attracted the most votes from the public.

Across the Home Nations, Blackpool's art deco Stanley Park has been named England's Favourite Park 2022, attaining prestigious 'National Treasure' status having now been named as the public's favourite park in England three times. In Scotland the national title went to Seaton Park in Aberdeen, whilst Craigavon City Park in County Armagh took the title in Northern Ireland, the second time it has scooped its national accolade.

We're also delighted to today announce the parks to have achieved 'Local Favourite' status, having placed in the top 20% of the public vote, demonstrating the love that their local communities have for them. The full list of local favourite recipients can be found here and each will receive a special certificate to denote its success.

This is the first time that the overall winner of UK's Favourite Parks has emerged from Wales, with Cyfarthfa Park in Merthyr Tydfil, Roath Park in Cardiff and Pontypool Park in Torfaen having taken the national title in recent years but not the overall honours.

Attracting close to 100,000 visitors each year, Penrhos Coastal Park is near Holyhead on the Isle of Anglesey in north Wales. The 200-acre park has everything from beaches to woodland walks and is extremely popular with both locals and tourists alike. With a rich history dating back to 1553, the green space is also home to several features of historical interest, including original Tudor-era buildings.

Commenting on the announcement of Penrhos Coastal Park as the UK's Favourite Park 2022, Fields in Trust Chief Executive, Helen Griffiths, shared: "We're incredibly excited to announce that Penrhos Coastal Park in Holyhead has been voted as the UK's Favourite Park 2022 by those who use and love it. It is clear that this park is a very special place to a lot of people, and we are thrilled to officially crown it the UK's favourite. We've had a fantastic response to the competition from all across the UK and I'd like to thank everyone who nominated and voted for parks over the past few weeks.

"The UK is home to such a diverse range of green spaces, and we hope that this award has encouraged people to truly appreciate their local parks. Our work to legally protect green spaces for good means we're well aware of the threats they face and how important it is value and celebrate them."

The campaign has illustrated how appreciation of our local parks has grown since the pandemic. As concerns mount over the climate crisis, green spaces have been proven to improve air quality and significantly limit the impact of heatwaves, by lowering urban temperatures.

With the annual Green Space Index revealing that 2.8 million people are not living within a ten-minute walk of a local park and that only 6% of green space provision in Britain is legally protected, the campaign has also highlighted the financial and developmental threats to green spaces.

By demonstrating our love for local parks, we can champion what they mean to communities and in turn help make the case for their long-term protection. Without legal protection our local parks can so easily be lost. And once lost, a green space is lost forever. You can play your part in this protection of treasured local parks by making a donation to support Fields in Trust's work.