North Inch in Perth is a green space full of history and importance to the city. Its protection ensures it will always remain as a place for the community.

Parks and public spaces can help define a city and showcase the way that history and heritage help to create a local community's sense of their own identity. Situated on the eastern bank of the River Tay, North Inch is a major park that has played an integral role in the life of Perth for over 600 years.

North Inch is large open space with fantastic views of the historic city centre of Perth and now its future is guaranteed for generations to come with its protection under the Fields in Trust Queen Elizabeth Fields Challenge.

Established in 1925, Fields in Trust believes green spaces are good, they do good and they need to be protected for good, and nowhere is this better demonstrated than here in North Inch.

North Inch has been an open space for just over six centuries; with royal connections dating back to the 1400's this was the site of a 14th century battle ground and is one of a several heritage spaces across the UK protected with Fields in Trust.

These days, it still serves as a battle ground, although solely of the sporting kind! As Andy Clegg, Community Greenspace Team Leader for Perth and Kinross Council, explains, "As well as having an 18-hole golf course since 1860 it also hosts the Scottish Open Volleyball Tournament every May and is home to Perth Rugby Club, several football teams and a cricket club.

"In fact, in the past, it's hosted several international cricket matches, including Scotland versus Australia and South Africa". It's also been a base for hot-air balloon flights, foot-golf, hosted several fun-runs and has a pétanque area alongside a permanent table-tennis table. North Inch is also popular for cycling and running along the path that circles the whole park. With so much choice and variety, it’s easy to see why this park is an integral part of Perth's sporting community. 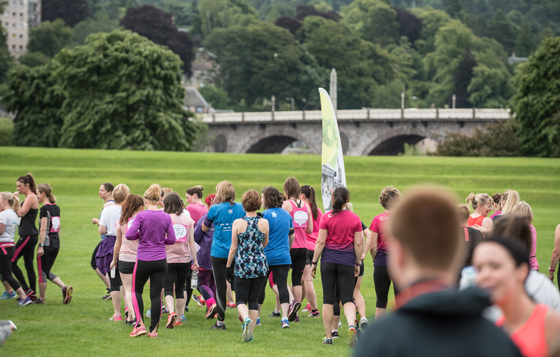 "For important parks, like North Inch, I would recommend protecting them with Fields in Trust - it's worth making the effort to protect these vital green spaces."

A vital community and environmental facility

In addition to its sporting significance the park provides a beautifully scenic walking commute to work and is well used by local workers relaxing in the fresh air and getting outside on lunch breaks; on warm days it is a favourite picnic spot for families.

The park, which is spread over more than 100 acres, also serves a more serious function as part of Perth's Flood Risk Management Scheme. This environmental purpose also has a sporting benefit, as Andy notes, "The defensive earth mounds have been formed in such a way that they provide natural tiered seating for spectators".

With its historical, environmental and sporting importance, it's easy to see why Andy describes North Inch as not only a beautiful and heavily used recreational facility but "an essential asset to the city, making it well worth protecting through the Fields in Trust programme". Protecting the site through the Fields in Trust Queen Elizabeth Fields Challenge, which protected over 1,500 green spaces in celebration of the 2012 Olympics and Paralympics, the Glasgow Commonwealth Games and the Diamond Jubilee, assures that the space can be used by the community of Perth for as long into the future as it has been in the past, safeguarding it against any threats to re-purpose the land.

Protecting the spaces with Fields in Trust also helped to raise the profile of the park through increased publicity, especially with the dedication and the signing of deeds ceremony.

The hope is that by having protected status and maintaining its high profile and importance to the city of Perth, North Inch will continue to serve as a community hub, as well as a competitive sports centre and remain a key part of Perth's social, historical and environmental core.

Protect Now:
Start the journey to protecting your parks

Fields Finder:
Search for protected parks and green spaces near you

Protection Successes:
Find out how communities have benefitted from our protection

Historic Programmes:
Learn about some of our past protection programmes