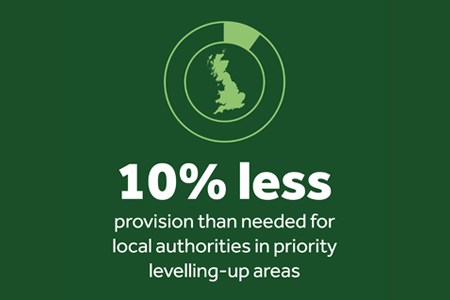 This year our annual Green Space Index analysis of the provision and distribution of parks and green spaces looks at the Government's flagship Levelling-Up agenda. We have identified that 40% of areas with the lowest GSI Score fall into Government's priority Levelling-Up locations.

Local authorities in these areas already have, on average, 10% less green space provision when benchmarked against the amount communities need to thrive and the situation is set to get worse as the amount of green space per person in priority areas will decline by 2040 as population grows.

Our Green Space Index analysis demonstrates the disparities between nations and regions that the Levelling-Up programme is attempting to rectify. Analysis of the findings indicates that Britain's local parks and green spaces could have a significant role to play in restoring a sense of community and local pride as well as contributing to health, wellbeing and climate change resilience.

Speaking at the launch of the new analysis at the Palace of Westminster, Chair of the Levelling Up, Housing and Communities Committee and Trustee of Fields in Trust, Clive Betts MP, said: "The role of green infrastructure in planning and healthy place-making should be central to government ambitions to rebalance geographic inequalities. Yet 2.8 million people already live more than a ten-minute walk from a public park, with levelling-up target areas having around 10% less green space than the average across Britain."

Alongside their value for community health and wellbeing, local parks have a vital role to play in supporting our environment. These spaces improve air quality, capture harmful carbon and boost biodiversity.

Levelling-up requires a focused, long-term plan of action if it is to act upon the drivers of spatial disparity. Ensuring all neighbourhoods have accessible provision of parks and green spaces can help address a complex set of targets set by Government which include improving pride of place, developing climate resilience, and improving local community infrastructure.

Fields in Trust's analysis suggests that, unless local parks and green spaces are protected in the long-term, any levelling-up interventions will be transitory.

There is 30 sqm of provision per person in Britain, but it is not equitably distributed and nearly three million Brits don't have access to green space close to where they live. 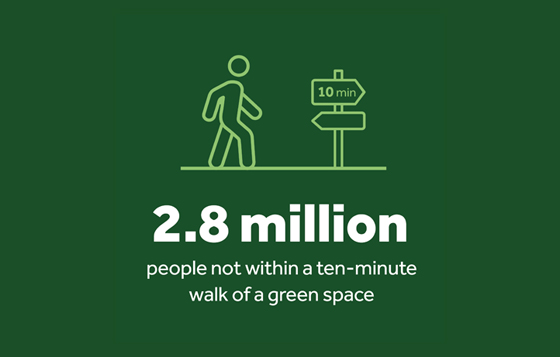 Liverpool West Derby MP, Ian Byrne, said: "Liverpool City Council's landmark partnership to protect all of their parks with Fields in Trust demonstrates a solution that will benefit both people and place - not just for current residents but also into the future as Liverpool's population is set to rise. The bold vision will ensure everyone in Liverpool lives within a ten-minute walk of a park or green space which will be protected, forever.

"During Covid, we have seen the huge importance of green spaces for all within our communities and this collaboration between Fields in Trust and Liverpool City Council will hopefully be a catalyst for many other local authorities to do exactly the same and enshrine their green spaces with Fields in Trust to protect them for future generations."

Fields in Trust have received similar commitments to protect access to local parks from the City of Edinburgh Council who want to ensure residents have local green space protected forever. Wrexham County Borough Council is adding to their protected portfolio of green space as part of a drive to net zero.

Chair of Fields in Trust, Jo Barnett, said: "We know that parks and green spaces play a vital role in people's health and wellbeing, yet the Green Space Index demonstrates uneven provision across Great Britain, and our most vulnerable communities are impacted negatively.

"Although the scale and interdependency across the levelling-up portfolio is intensely complex, parks and green spaces deliver impacts across the range of social policy agendas yet remain undervalued for the multiple benefits they contribute to our communities. The climate crisis adds a new impetus to protect urban green space and as our work in Liverpool shows local authorities are recognising the important part green space plays in our neighbourhoods, towns and cities and stepping-up to ensure it is future proofed."

The Green Space Index is Fields in Trust's annual barometer of publicly accessible park and green space provision in Great Britain. The report was first produced in 2019, and this year is the Index's fourth edition. You can explore the Index's findings in your area online and by using our interactive online app.