Our Patron and President

Fields in Trust is a charity incorporated by Royal Charter and has since it was established in 1925, had support from our Royal Patron and Presidents.

The charity was founded by the Duke of York, later King George V, in 1925, who became the first President. This royal link continues today with Her Majesty The Queen as Patron since 1952. We are grateful for her long-standing involvement.

Today we are fortunate to have the active support of our President HRH The Duke of Cambridge who took over this role from his grandfather in 2013 when HRH The Duke of Edinburgh retired after 66 years’ service.

The Duke and Duchess of Cambridge attended the dedication of the very first Queen Elizabeth II Field in Blackburn, Lancashire in April 2011 shortly before their wedding

We are delighted to have a Foreword from The Duke in Our Strategy and are grateful to him for his commitment to working with us to protect and champion parks and green spaces.

HRH The Duke of Edinburgh was President from October 1948. During his long and committed service High Royal Highness was involved in every aspect of the organisation. As well as regularly working in the office he attended opening ceremonies of protected parks and green spaces, played in many fundraising cricket matches and hosted charity galas.

During The Duke's Presidency, despite the continuing pressure to dispose of playing fields, the number of fields protected with Fields in Trust grew from 430 sites covering 3,300 acres to over 2,000 sites covering 28,865 acres. This could not have been done without the support and help of His Royal Highness.

He was aware of the power of the media; appearing in a short campaign film for the charity and providing a spoken introduction to a Frank Sinatra recording – widely accepted as the first charity fundraising record.

We are enormously indebted to The Duke for his support and were deeply saddened to learn of his passing aged 99 in April 2021.

In 2012 HM The Queen joined TRH The Duke and Duchess of Cambridge at a special event in Vernon Park, Nottingham to celebrate the successful dedication of Queen Elizabeth II Fields all around the country.

In 2014 The Duke of Cambridge launched a new programme in partnership with The Royal British Legion to protect war memorial parks and green spaces called Centenary Fields at War Memorial Park in Coventry. In 2016 The Duke joined us during Remembrance Week to mark the dedication of Kensington Memorial Gardens as a Centenary Field.

“As President of the charity Fields in Trust, I had the privilege of being in Coventry's War Memorial Park to launch their Centenary Fields Programme, the charity's initiative to safeguard war memorial parks up and down the country from ever being lost to residential or commercial development in the future… The anniversary of the Great War will be commemorated in many ways over the next four years. Through this significant contribution, Fields in Trust and The Royal British Legion are providing a fitting way for communities to both remember the past and protect the future.”
HRH The Duke of Cambridge, President, Fields in Trust 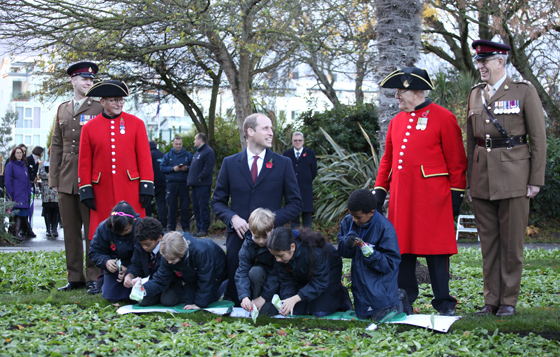 History: We are proud of our long history protecting parks and green spaces

Ambassadors: Our team of Ambassadors support our work and help us champion parks and green spaces

Centenary Fields: Protected in memory of those who lost their lives in World War I